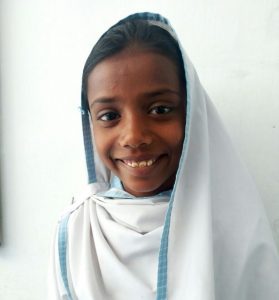 Amina Yaseen is a student of Class Three. She Belongs to Jauharabad District Khushab. Her father died due to Heart Attack even before her birth. Through our Sher Ghar Ex-students she was referred to Sher Ghar. Her Mother contacted the management of Sher Ghar requesting for her admission. After due diligence process she was admitted to Sher Ghar in May 2014 and enrolled in Class Nursery at Tameer-e-Millat High School, Mitha Tiwana being managed/operated by the Society for Human Empowerment and Rural Development (SHER). She has 01 brother who is studying in Four Class. The only source of income of the family is through her mother who is working in houses as aaya.

She is an average student of her class. Her dream/inspiration is to become Doctor in her professional career. She is good in Football.

Her favorite subject is Urdu. Her hobby is drawing.