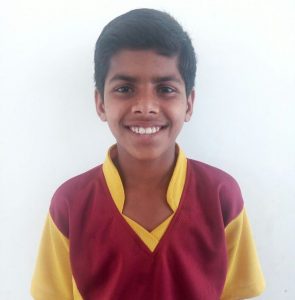 Ahmad Hayat is a student of Class 9th. He belongs to Moh Shahianwala Mitha Tiwana, District Khushab. His family can’t afford his studies. Through our Sher Ghar Ex-Employee (Maali) Mr. Akhatr he was referred to Sher Ghar. His Father contacted the management of Sher Ghar requesting for his admission. After due diligence process he was admitted to Sher Ghar in Apr 2008 and enrolled in Class Nursery at Tameer-e-Millat High School, Mitha Tiwana being managed/operated by the Society for Human Empowerment and Rural Development (SHER). He is the only child of his parents. The only source of income of the family is through his Father who is working as Labour.

He is a Good student of his class. His dream/inspiration is to become an Army Officer in his professional career. He is a good player of Volleyball.

His favorite subject is Urdu. His hobby is Drawing.